I had no idea or no intention to write again. I though that’s it… The end.

Life decided differently, and now am alive. I had almost died 6 days ago. I overdosed again, but this time for a different reason.

Sunday it was, I knew there would be one pharmacy only opened. I went in and asked for 2 packs of paracetamol and one of aspirin.

I headed along Rue de Seine all the way to the river. I had even bought a large bottle of water at the pharmacy. What were they thinking I don’t know!

Glam, I was looking at the river and sipping one by one my pills. Families passing by, a child on his scooter, a group of American tourists on bikes. One pack gone, then I opened the second. I had managed to take 20 pills of paracetamol 1g each, and this is when I discovered that the aspirin needed to be dissolved in water.

Headed back towards the back streets of the 6th arrondissement, and found a nice coffee shop. I ordered their largest coffee and a glass of water. Little by little I had 18 pills of aspirin 350mg each.

It was 10:30 in the morning. I ordered a cab and decided to go to the psychiatric emergency center by my house CAC*. I had called my parents by then and they were waiting for me. Soon the ambulance came and I was taken to the reanimation room. My temperature was high.

Tbey started inserting canulas and tubes all over me. I had one placed inside my nose and this was the worst part of the whole experience. They filled it with charcoal to make the paracetamol effect go away. They told us I would stay at least 5 days at the hospital.

I threw my guts out. It must have been that which saved my liver, or maybe it was God. I’d rather say the latter. I have to confess that I was scared. At some point I felt that was it. They then said that my blood results were good and that I could go home. A miracle by all means. 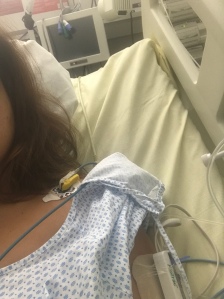 I wish the story ends here. It just begins. My husband had to take me to the famous psychiatric hospital of St. Anne. I had to have a psychiatric evaluation by a third party different from my own psychiatrist or that of the CAC.

Well, four hours later into the waiting room, we were finally able to sign the most importantly binding paper of my life. It said that I can get out of the hospital against all medical opinion and under my own responsibility. My husband of course had to sign it as well. We had talked hard and long about the danger of such an act. It basically meant that he will be psychologically guilty should I decide to be in danger to myself or others. That night I promised him that this will never happen again. I would never forget the look in his eyes..

The deal may sound naive. Yet we have a good system in place to avoid further crises. The CAC is my panic button. I will tell my family immediately that my rage is coming up and I would immediately go there. At the center they talk to you, they give you medication, well they do what it takes to stop you before committing the act. I also have biweekly meetings with the team to discuss any important developments.

Lesson learnt the hard way. Life is precious. By doing this I was not only hurting myself, but my whole family; my husband, my children and my father. Do not commit the act. Talk to someone first, try it. Maybe it works, maybe it saves your life and makes you grateful for what you have never lost…

Tips and tricks for those in Paris

*CAC Garenciere: A centre for psychiatric emergency. These centers around Paris are places made to welcome and orient or even be a place of hospitalization for a short period of time.

Would love to read from you